More and more food photographers are being asked to provide videos, animations and cinegraphs along with their stills work. As a stills photographer and director I’ll be discussing my own work in video as well as the differences, the pitfalls and the things you need to know to be able to make the move to film yourself. 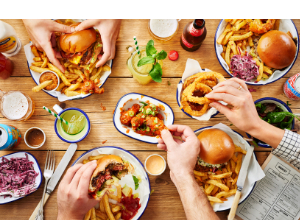 Scott Grummett is a Photographer & Director specialising in Food & Drink. His team has been at the forefront of the modern revolution in commercial food presentation, creating graphic and most importantly, delicious-looking stills & films for clients in the UK and internationally.

Most recently Scott has been commended for his directing work as part of Weight Watchers’ Superbowl campaign in the USA, featuring Breaking Bad’s Aaron Paul. At home he is best known for his work establishing the look of London’s recent hamburger revolution with Honest Burgers.  A specialist in gluttony Scott has been called in to work with kings of chicken KFC and Nando’s for creative advertising and PR work in the UK.

Some of Scott’s first major commission’s were shooting Still Life for Wired Magazine. He blew things up, started fires, encased objects in ice, launched fireworks in the studio and fired guns into expensive props. It was organised chaos, this element still rings true in his work today; curating crumbs, drips and smears to make a dish look perfect but naturally thrown together are still the hardest parts of the job to get right.